The date has been set!

I will have more information later, but for now, SAVE THE DATE!

Shearing Day 2013 was on April 10th.  And what a cold and rainy day it was!  It actually started raining on Monday, the 8th so by Sunday evening we had all the alpacas (all 34 of them) tucked away in the big barn to stay dry.  By the time shearing day came around, they were none too happy! 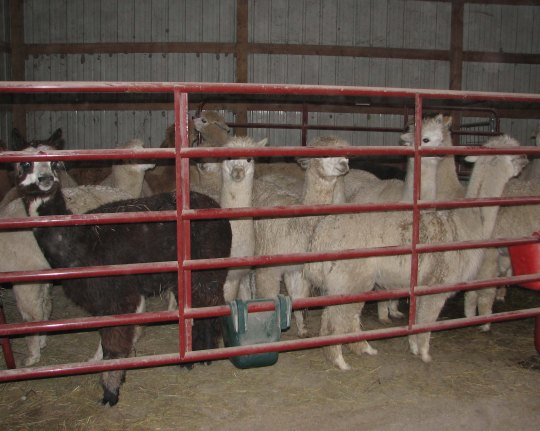 Even Balto wondered what all the fuss was about. 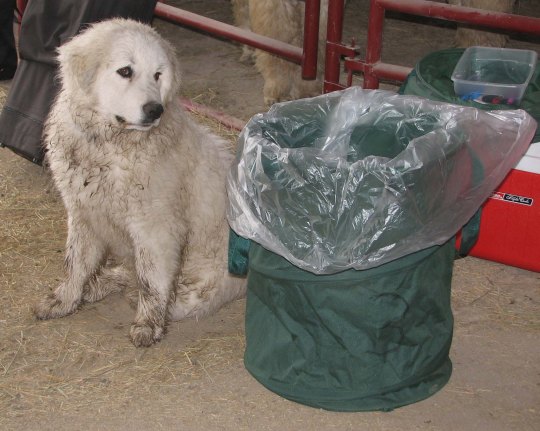 The day started off only in the upper 30s and with a cold rain.  It continued to rain all day long and only made it into the 40s by the end of the day.  But Brian and his crew from Shearing Alpacas got there promptly at 9:00 a.m. and got to work. 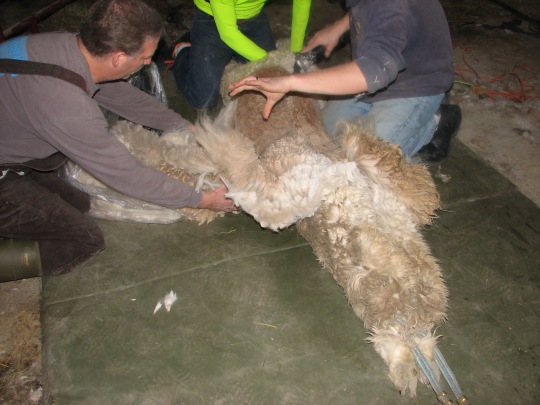 I will tell you, because of Brian and his crew, this was the easiest, least stressful shearing I have ever been through!  I would highly recommend them!

CSA fiber has already left the farm and has arrived at the fiber processor, Shepherd’s Mill, Phillipsburg, KS for processing. 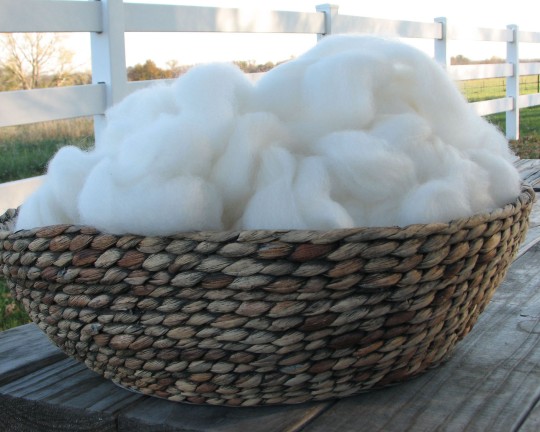 5% or 5.6 lbs. – Was used for miscellaneous processing, rovings and yarns

25% or 27.85 lbs. – was processed into felt for a special top secret project I have planned

23% or 25.0 lbs. – was sent off to the Natural Fiber Coop for processing into product

24% or 26.35 lbs – is considered our rug fiber.  It is still sitting in my garage waiting for the funds to send off for processing.

All in all, we got 110 lbs from our 28 alpacas and we are proud that all of it (with the exception of the rug fiber) has been processed into product.

2012 was our first full year on the farm.  We closed on the property in August 2011, worked on shelter and fencing and were able to have our alpacas transported to their new home in November, 2011.  I’m sure you can imagine that 2012 was a year full of fun, excitement, challenges, mistakes and even a heartbreak or two.  Below is a recap of what went on at Parsons’ Prairie Farm in 2012:

I have to say, I was a little surprised that we did not already have cats living around the barns when we purchased the farm.  But since we didn’t see a cat anywhere the first few months, we adopted Willie & Nillie to be our barn managers. 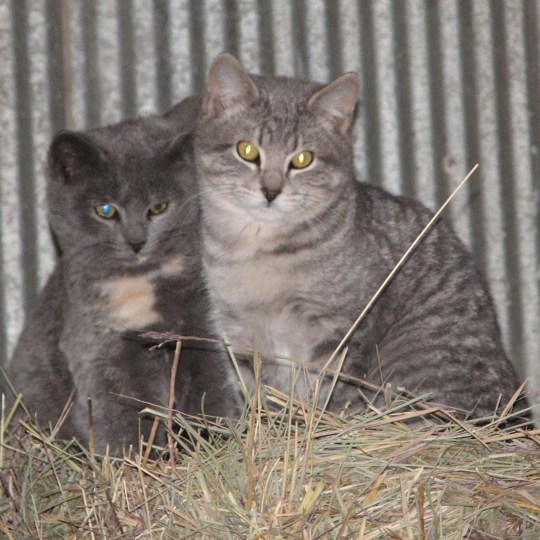 They settled in quite nicely in the hay barn and endeared themselves to the alpacas almost immediately.  It was not uncommon to find one of them resting comfortably in the alpacas hay trough or snoozing on top of the hay bales.  Nillie has always been very social, but Willie was a little on the wild side.  Willie, named after Willie the Wildcat, (yes we are K-State fans!), was never quite able to completely call it home here.  He would wander and sometimes we would not see him for days at a time.  When he was around, he tended to be very territorial, particularly in the garden so you had to watch out that he wasn’t waiting to pounce.  Eventually, he went on one of his “wanders” and we haven’t seen him since.  We hope he is ok and has found a home that he felt more settled in.  He is a beautiful cat!

I had such big plans for our first season of gardening, but the heat and drought of the summer changed our plans a bit.  We had such a large garden, so many berry bushes and fruit trees that it was just impossible to keep it all watered.  We got some wonderful onions, snap peas, lettuce, radishes and spinach before the horrible heat set in.  Our tomatoes did pretty good, but our peppers suffered a little bit.  We had some nice green beans but probably not as many as we could have had it not been so hot and dry.  We planted a nice strawberry bed, and while we lost a few of those plants, I believe they will be fine and fill in for next year.  We had wonderful blackberries, but lost all the new blueberry bushes we planted.  Our corn did not do nearly as well as we had hoped, but what we did get was delicious.  I told myself last summer that I had bit off more than I could chew, at least more than I could keep watered in the horrible heat.  Despite it not being the best year for a garden, we have had plenty of blackberry cobber, blackberry jam, apricot jam, sloppy joe mix, stewed tomatoe mix, rotel, and corn this winter. 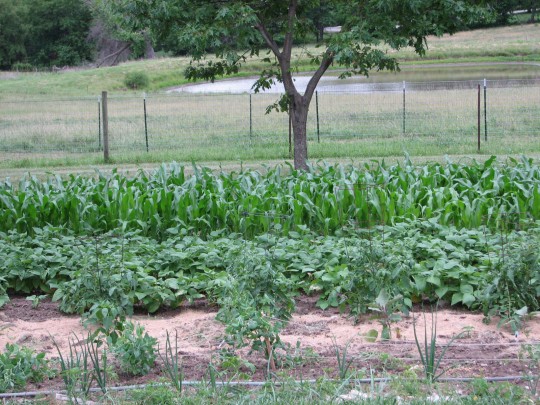 We survived our first shearing day at the farm.  Jeff and I have worked at many shearing days at other farms but this was the first for us at our own place.  I will not lie and tell you it was a perfect day, nor even close.  But we got it done and learned much in the process.  We had some wonderful help and I can’t even tell you what a relief it was to look out in the pastures and see all those naked alpacas!   I know with the heat we had last summer that they were happy too. 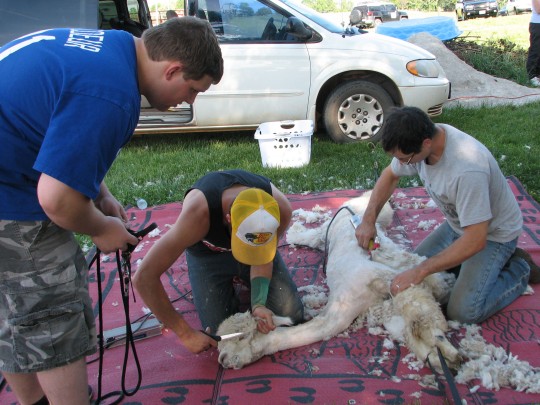 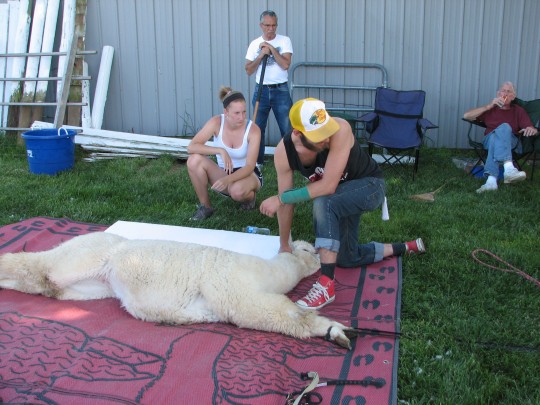 In September we came home from our local feed store with 8 chicks.  I had been studying for months and desperately wanted hens for eggs.  I really wasn’t planning on doing anything until this spring, but the opportunity arose and we jumped at it.  We lost one of them the first night but otherwise they all made it just fine.  Unfortunately 2 of the 7 chicks have started crowing in the last couple of weeks, so obviously they won’t be laying me any eggs.  We remodeled the old chicken coop in our backyard and added an outdoor space for them.  In a few weeks, we plan to start letting them roam the backyard while we are home and hopefully, if they can get enough daylight, will start laying eggs soon.

In November, 6 more alpacas arrived from Oregon.  Alpaca Jeff, Cordelia, Mari, Buttercup, Alcatraz, and Sweet Pea all got off the transport and have just fit right into life on our farm.

Parsons’ Prairie Farm Fiber CSA was officially started although I still have much marketing work to do.  I have started with the 2012 clip and will shortly announce the plans for the 2013 clip. 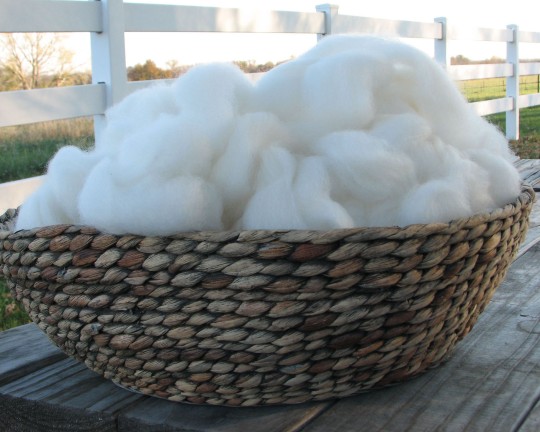 We lost Wrigley in 2012.  I don’t know if it was the heat, if there was something else going on that we weren’t aware of, or maybe a combination of the two.  But on a very hot day, Jeff found Wrigley already passed in the barn.  It broke our hearts.

Wrigley was, in many ways the alpaca face of Parsons’ Prairie Farm.  He was a beautiful fleeced animal, handsome, and with the sweetest temperament in the world.  Many of you who have bought roving from me, dyed or natural, received Wrigley’s fiber. Wrigley loved nothing better than to be dirty!  If there was a puddle to be found, he was in it….any loose hay to be had, he was wearing it.  I searched and searched for the best picture of Wrigley and honestly, the picture above is about as clean as Wrigley ever was as full grown alpaca.   The picture below is Wrigley as a cria.  This is how I will always remember him.

We had our first annual “Open Farm” on December 2nd and it was a wonderful day.  We did not intend to have it that late in the year, but we had so many personal obligations during the year, it just never seemed to fit in.  I don’t know how we got so lucky, but we were blessed with a beautiful 60 degree day.  It was a wonderful day to be at the farm.  Those that came were able to get up close and interact with the alpacas (Alpaca Jeff stole the show), wander about the farm, check out the chickens and take a look at the farm products that come from our beautiful fiber animals.  We are already planning and looking forward to our 2nd annual farm day in 2013.  We hope you will join us.

We hope you had a wonderful 2012 and thank you for allowing Parsons’ Prairie Farm to be a small part of it.

It is an exciting time at Parsons’ Prairie Farm. Everybody knows that there are big things about to happen.  So we are waiting……. 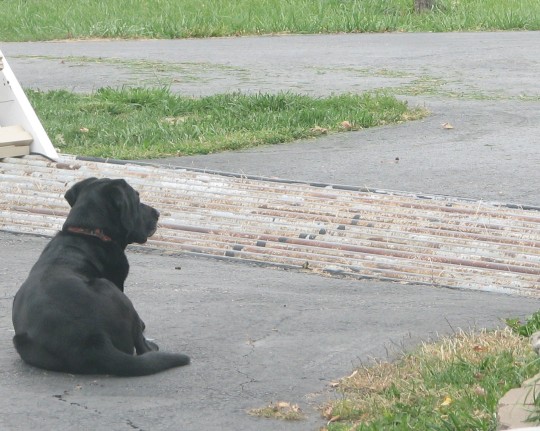 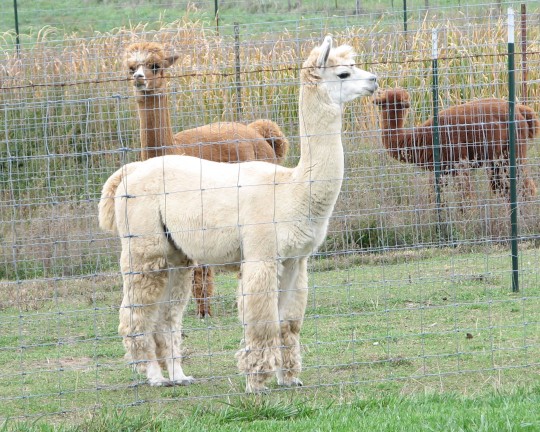 And waiting some more……. 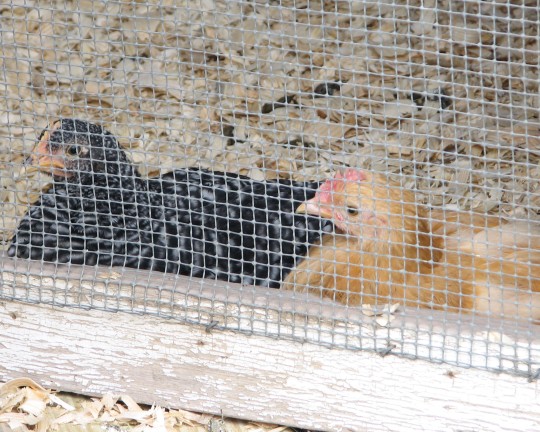 Because no one wants to miss:

More Alpacas on the way – Peggy & Dave of Alpacas at Tucker Creek, Astoria, Oregon  are sending 6 more alpacas to contribute their luscious fiber to the Farm.  We expect Cordelia, Alcatraz, Buttercup, Sweet Pea, Mari and Jeff to arrive the weekend of Oct. 27th/28th.

Announcement of Parsons’ Prairie Farm Fiber CSA – I know it is late in the year, but there is no time like the present to introduce the Fiber CSA with the 2012 clip.  The fiber is back from the processor and I can’t wait to show you what we have to offer.  Look for more details coming soon.

Our first farm Livestock Guardian Dog (Great Pyrenees) will arrive after the first of the year.  The little fellow (he’s little right now anyway) was just born a few weeks ago at Wing and a Prayer Alpacas, Amity, Oregon.  He will spend the time he needs with his mom and then will stay another few weeks to be trained by the older, more experienced LGDs at the Coleman’s.

I look forward to posting details about all the above as I have more information.  In the meantime, keep watching!